I’ve recently returned from a twelve-day junket to the Maritimes and Montreal, the last of my travels for the foreseeable future. The impetus for the trip was to present at Material Matters, the 10th annual conference of the Atlantic Medieval Association. I was also invited to return to Acadia University (where I did my MA… a decade ago…) to guest lecture in Kevin Whetter’s Canterbury Tales class. From there, I spent a night in Halifax with my friend Kait Pinder, a brilliant Canadianist at Mount Allison, before taking the train to Montreal to visit McGill friends and spend some time in the Rare Books and Special Collections looking at books of hours. But more on these things below. 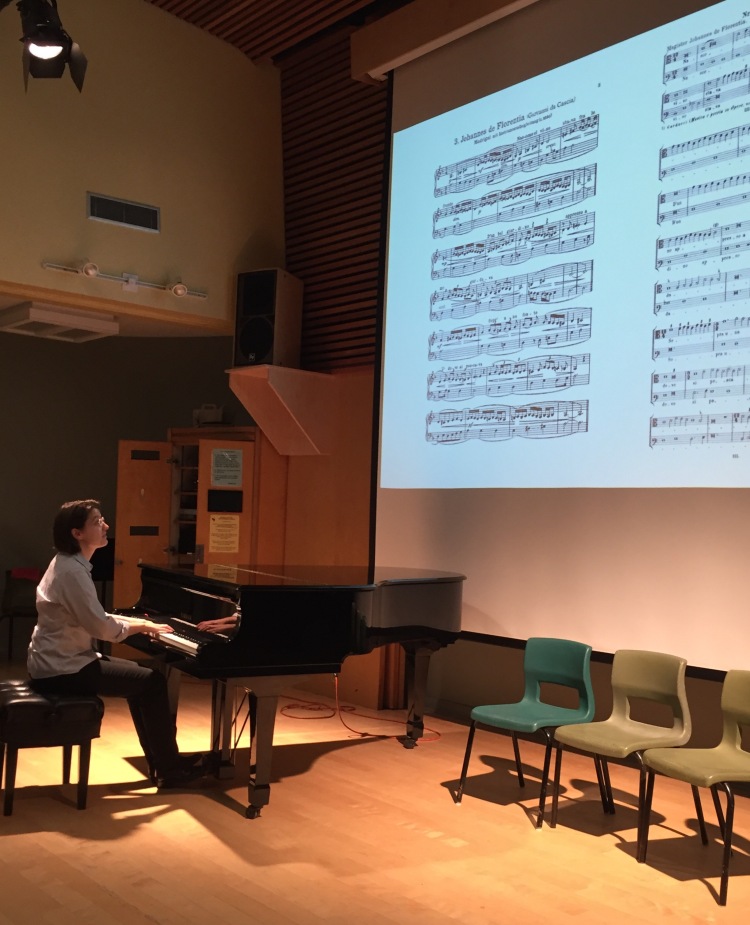 In my paper, “West Midlands Devotion and the Beauchamp Missal (Oxford, Trinity College MS 8)”, I examined how Sir William Beauchamp’s mass book (c. 1390) offers a window onto his personal piety and the development of the cult of the Holy Name of Jesus in the West Midlands, the region where Beauchamp was most influential. I suggested that while Beauchamp is associated with the so-called Lollard Knights, his training as a priest (he was at Oxford from 1358 to 1361) should not be overlooked when considering his personal devotions. And his mass book seems to say so, too: several historiated capitals in his missal underscore the sacerdotal role.

Going back to Acadia and Wolfville, Nova Scotia, is always a great pleasure and this time was no exception. (It had been six years: far too long.) I was very glad to reconnect with old friend and former professors, to sit and work in the Just Us coffee shop, where most of my MA thesis was written, and to enjoy pints at the Library Pub and Paddy’s. I even performed a couple songs at Paddy’s Open-Mic Monday. Guest lecturing in Kevin Whetter’s Canterbury Tales class was very fun as well. We had a lively discussion of The Miller’s Tale—of quitting, crossing class boundaries, the deception of signs and language, and the value of a good joke. While I was at Acadia I was also invited to introduce two sections of Richard Cunningham’s first-year students to Chaucer and the idea of the fabliau. These classes were also very welcoming and engaged. There’s nothing like showing students images of manuscripts for the first time. Lots of fun all around.

I was fortunate enough to take the overnight Via Rail train from Halifax to Montreal (thanks, SSHRC Connect grant!). This allowed me to get in some important additional research at McGill’s Rare Books and Special Collections. I’d looked at some of these materials last December and wanted to do some follow up work. This was well rewarded, for I found a very interesting pairing of prayers in one of their mid fifteenth-century missals. This codex includes prayers to Jesus as well as the Five Wounds, paired devotions that developed in the late-fourteenth century. Texts linked to both devotions are found, for instance, in Oxford, University College 97, a manuscript linked to Sir William Beauchamp’s now-lost library. I’m excited to work with this McGill manuscript further. Eventually, that is.

Right, back to this pile of applications.