The International Pearl-poet Society once again has a strong presence at the International Congress on Medieval Studies, with five sponsored sessions at the 2020 gathering at Western Michigan University in Kalamazoo. We’re also proud to once again be co-sponsoring a session with the Medieval Association of the Midwest (MAM).

Thanks to our new VP, Ashley Bartelt (Northern Illinois University), for the snazzy poster! (Full text below, too). 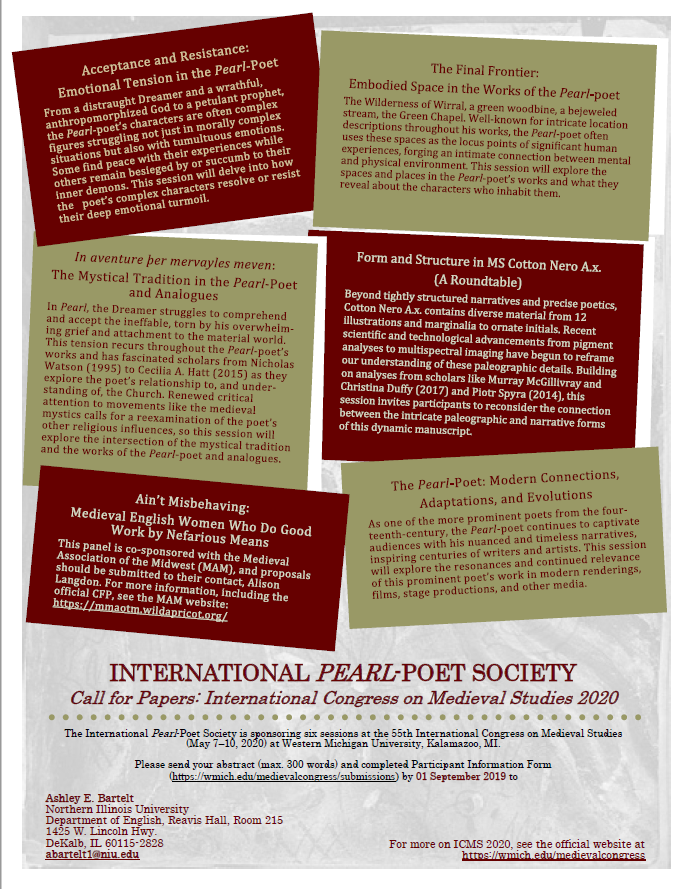 Beyond tightly structured narratives and precise poetics, Cotton Nero A.x. contains diverse material from 12 illustrations and marginalia to ornate initials. Recent scientific and technological advancements from pigment analyses to multispectral imaging have begun to reframe our understanding of these paleographic details. Building on analyses from scholars like Murray McGillivray and Christina Duffy (2017) and Piotr Spyra (2014), this session invites participants to reconsider the connection between the intricate paleographic and narrative forms of this dynamic manuscript.

In Pearl, struggles to comprehend and accept the ineffable, torn by his overwhelming grief and attachment to the material world. This tension recurs throughout the Pearl-poet’s works and has fascinated scholars from Nicholas Watson (1995) to Cecilia A. Hatt (2015) as they explore the poet’s relationship to, and understanding of, the Church. Renewed critical attention to movements like the medieval mystics calls for a reexamination of the poet’s other religious influences, so this session will explore the intersection of the mystical tradition and the works of the Pearl-poet and analogues.

As one of the more prominent poets from the fourteenth century, the Pearl-poet continues to captivate audiences with his nuanced and timeless narratives, inspiring centuries of writers and artists. This session will explore the resonances and continued relevance of this prominent poet’s work in modern renderings, films, stage productions, and other media.

From a distraught Dreamer and a wrathful, anthropomorphized God to a petulant prophet, the Pearl-poet’s characters are often complex figures struggling not just in morally complex situations but also with tumultuous emotions. Some find peace with their experiences while others remain besieged by or succumb to their inner demons. This session will delve into how the poet’s complex characters resolve or resist their deep emotional turmoil.

The Wilderness of Wirral, a green woodbine, a bejeweled stream, the Green Chapel. Well-known for intricate spatial descriptions, the Pearl-poet often uses these locations as the focal points of significant human experiences, forging an intimate connection between mental and physical environment. This session will explore the spaces and places in the Pearl-poet’s works and what they reveal about the characters who inhabit them.

This panel is co-sponsored with the Medieval Association of the Midwest (MAM), and proposals should be submitted to their contact, Alison Langdon. For more information, including the official CFP, see the MAM website https://mmaotm.wildapricot.org